“The girl in the diary. Searching for Rywka from the Łódź Ghetto” 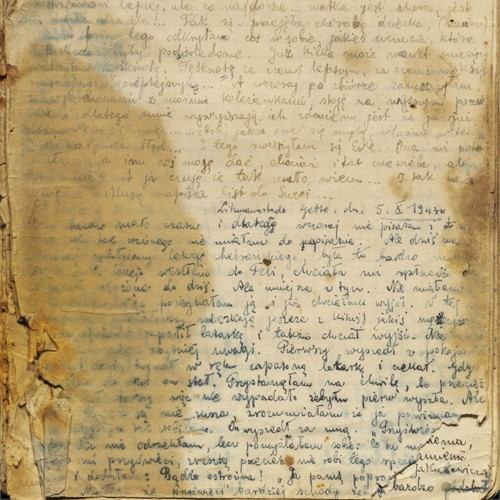 In 1945 a Soviet doctor found a school notebook in the liberated Auschwitz-Birkenau Camp. It was a diary written by the teenaged Rywka Lipszyc in the Łódź Ghetto between October 1943 and April 1944 — the testament of an orthodox Jewish girl who lost her siblings and parents, but never lost hope despite moments of doubt. More than 60 years after its discovery, the diary traveled to the United States, where it was translated from Polish, supplemented with commentaries and published in book form.

Rywka Lipszyc’s diary, a moving memoir of life and adolescence in the Łódź Ghetto, has become a starting point for The Girl in the Diary. Searching for Rywka from the Łódź Ghetto exhibition created by the Galicia Jewish Museum in Kraków, Poland. Selected excerpts of the diary are supplemented by expert commentary from historians, doctors, psychologists and rabbis. These commentaries help us to understand the context of the times and events Rywka refers to in her diary. The exhibition includes also unique historical artifacts and documents from museums in Poland, the USA, Israel, Germany and Belgium. The beads, thimbles, and toys are a moving testament documenting the personal dimensions of the Holocaust, which are so easily overlooked when teaching the Holocaust.

The story presented in the exhibition is mainly, although not exclusively, the story of women. The women who fought for survival first in the Łódź Ghetto and then in the concentration camps; and the women who took up the task in reconstructing their fates after the war.

Most of the wartime narratives and memories from the German occupation concentrate on the fates of men — soldiers, politicians, leaders. In Rywka’s world, the perspective is different. Men appear in memories and stand in the shadows in the background. They are present, but not dominant. The world that we get to know from Rywka’s diary is populated by women and its structure is created by the relationships between them. It is filled with their pain and longing, their courage and daily struggles, their fears. When the Museum team started to work on this exhibition, we were struck deeply by this feminist perspective. We decided — as much as possible — to show our respects and bring visitors closer to this reality, the world of the women described by Rywka in the pages of her diary. That is why all of the commentaries on the diary’s text were also prepared by women. The idea of commentary itself is strongly tied to the Jewish tradition of explaining and interpreting sacred texts. In this symbolic way we also bind ourselves to Rywka’s devotion to the tradition in which she grew up, to her unwavering faith in God and God’s protection.

To illustrate the story of Rywka Lipszyc, we used photographs taken by three of the most famous photographers of the Łódź Ghetto: Henryk Ross and Mendel Grossman, employees of the Statistics Department of the Jewish ghetto administration, and Walter Genewein who preserved the reality of the ghetto on colored slides. Some of the negatives are destroyed or incomplete. Stored in closed containers in the ground, in hiding, they suffered partial damage. They show only a part of the image captured on film. They are fragmentary, like the story of Rywka, which — similarly to these negatives — had to wait for years to see the light.

Despite the large collection of photographs from the Łódź Ghetto and intensive searches, to date no photo of Rywka Lipszyc has been found. We do not know her facial features, the color of her eyes and hair. We do not know how she smiled or how she expressed sadness. Unable to portray our protagonist visually, we have decided that all of the people captured in the photographs shall remain anonymous.

Rywka exists for us only through the words written in her diary. But these words also do not give us the full picture of her life. She describes only a certain part of her life occurring between 3 October 1943 and 12 April 1944. The first surviving entries refer to her time in the ghetto. Did Rywka keep a diary before this? What was her life like before the outbreak of the war? We do not know. The last sentence on the last surviving page is unfinished. What could have caused Rywka to stop writing, which she loved so much and brought relief to her bleak everyday life in the ghetto?

What happened with Rywka Lipszyc?

Rywka did not die in Łódź ghetto, nor did she die in Auschwitz-Birkenau, Christianstadt and Bergen-Belsen, where in April 1945 she was liberated by the British army. In summer of 1945 she was evacuated to the military hospital near German city of Lubeck, where her traces disappear.

In recent years, thanks to the work of Anita Friedman, director of the Jewish Families and Children Services information about Rywka has been disseminated in the press, TV and Internet. Jewish Families and Children Services published her diary in several languages; parts of it, accompanied by contextual materials, serve as a teaching tool in schools worldwide. Maybe we will never know what happened to Rywka. Did she die in a military hospital in northern Germany in 1945? Or did she survive to start a new life far away? Until now, nobody has been able to find her, but the work of many people brought her identity back, saving her name from oblivion.

One name, so easy to overlook among 6 million other.

Anita Friedman, director of the Jewish Families and Children Services writes in the introduction to the exhibition: “How could such a beautiful manuscript be produced by a child whose formal education ended when she was about 11 years old, after the Nazis invaded Poland? The secret is in its complete, intimate honesty. Rywka speaks unguardedly about the pleasures and pains of adolescence, her yearnings and vanishing dreams, deep family tensions and her feeling of being entirely alone in a murderous world–all feelings that remind me that Rywka was just one of hundreds of thousands of young Jews who felt similarly, but left behind neither names nor a record of their lives. Rywka speaks for all of them.”

“The improbable survival of Rywka Lipszyc’s diary is in many ways a metaphor for the inextinguishable spark of Jewish life. Through this moving account, we are reminded that 6 million is just a number, to which we are all too numbed.”
– Daniel Gordis, Koret Distinguished Fellow, Shalem College, Jerusalem